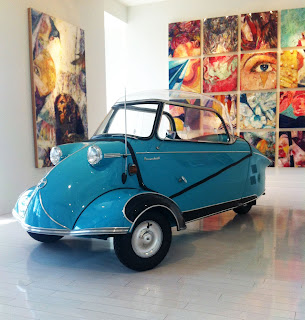 For our June exhibit we installed two candy colored "bubble cars" on loan from a private collector and friend of the gallery.  The vehicles are very fitting given the nostalgic and seemingly "Hitchcockian" flare of Amy Spassov's 2012 exhibition.  Messerschmitt was originally known for the famous German Aircraft built for the German army, Messerschmitt AG, designed by Willy Messerschmitt.  After World War II, and for the obvious reason the company was not allowed to produce aircraft so they came up with an alternative design.  These 1956 three wheeled "bubble cars" or "cabin scooters" known as Messerschmitts will be on display for the duration of Amy Spassov's exhibit "Re: Figments" for the month of June at Hallway Gallery.
View the work online 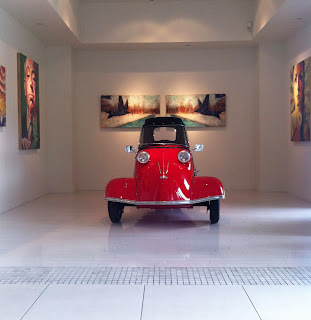