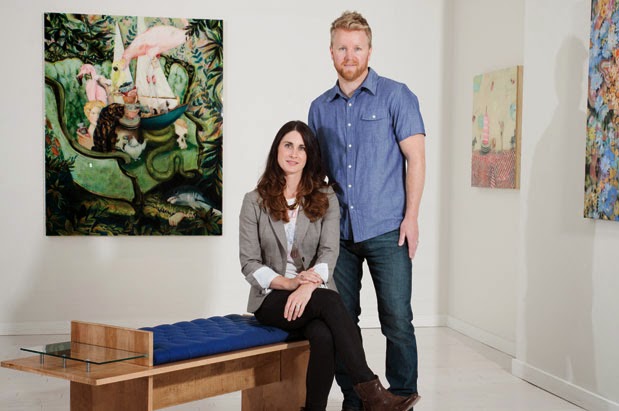 While we applaud the sudden wealth of delectable restaurants opening willy-nilly in Pioneer Square, it’s refreshing to learn that there are also some non-food-focused efforts entering the mix. Exhibit A: Hall Spassov Gallery (319 Third Ave. S; hallspassov.com) a contemporary gallery that has operated in Bellevue since 2006. In July, the gallery opens a second location in the building formerly occupied by Grover/Thurston Gallery. Bellevue-based husband and wife Erik Hall and Amy Spassov, both artists themselves, represent approximately 30 emerging and established artists, including local painters Francesca Sundsten and Alicia Tormey. The gallery will debut in the neighborhood with User Profile (7/3–7/31), a group exhibition that reveals the gallery’s aesthetic, which Hall describes as straddling the line between visually pleasing and “challenging.” The duo is excited about being in the midst of so many other galleries (the Bellevue space is in the heart of the shopping district) and the loyal First Thursday crowds. “Seattle has a built-in curiosity about art that will drive our foot traffic,” Hall says. But what about the new commute? “People act as if the bridges are the Great Wall of China,” he jokes. “I guess we are going to find out what nomadic invaders of the Ming Dynasty were up against.”
Posted by HALL/SPASSOV at 4:47 PM