First things first…  I don't know much about fly fishing or tying flies.  I have however, learned a great deal from my father-in-law Jay Spassov.  He is a great guy, an accomplished fly fisherman, a protector of nature and to me a friend and fellow artist.  While our medium is different our care and consideration for our craft is the same.

I have a state-of-the art easel I use daily for painting.  I have arranged my studio with attention to how I work, move and feel in it.  The best investments I make are the ones I make in the equipment I use for my art.  My easel, what I use to hold my canvas, was by far the most important.

It was the glorious Super Bowl last year (Ravens 34  vs. Niners 31) that I decided to build Jay a new "Easel".  I did tons of research to figure out what a fly tier might need in the way of tool storage, structure and workability.  What I discovered was that most fly benches are stable, but that stability had a downside.  The generally accepted designs offered nothing in the way of adjustability.  I thought for months about how I wanted to approach the build so that I could balance adjustability with stability. 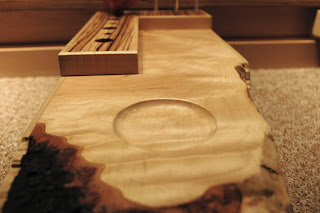 The live edge and the spalted Maple mimicked waves, water and the shore. 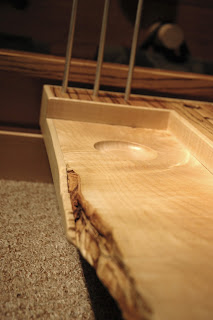 I knew I wanted to use live edge wood to help keep the feeling of nature in the bench that would develop to include many mechanical parts. 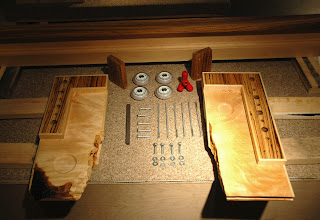 Those mechanical parts I mentioned… 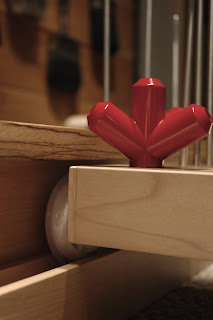 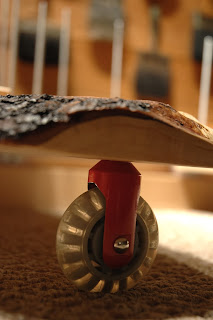 I got some wheels off of a funky old lamp.  Wheels on a lamp are strange, wheels on a fly ting bench… more strange. 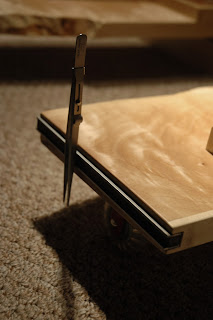 I added in a few other innovations.  The magnetic strip in the front right side is my favorite.  I watched Jay tie many flies and always noticed him setting scissors, pliers and other tools down and awkwardly reaching for them again as he held a fly.  This keeps the tools front and to the right near his working hand. 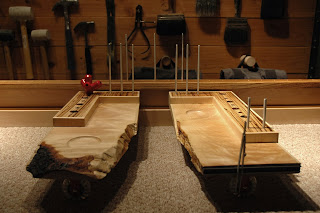 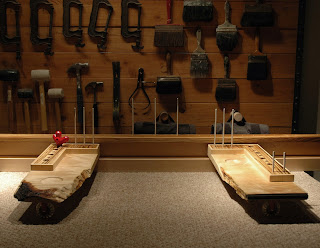 Adjustability came in the form of multiple tool holder sizes, but was most apparent in the rolling tool arms.  The bench expands from 0 inches to 72 inches allowing plenty of room to spread out feathers, furs, tools and thread.  It can also divide into two separate work stations.  The wood is White Maple and Zebrawood.  The thread dowels are made out of polished aluminum.